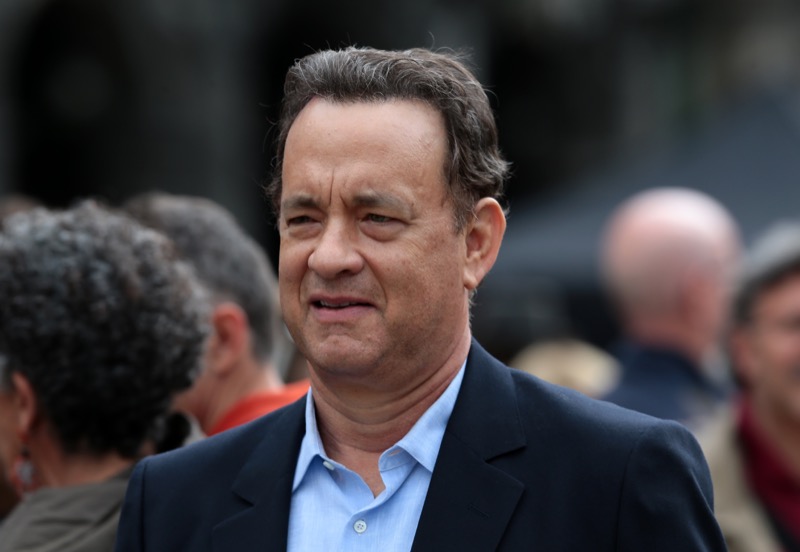 Tom Hanks got rowdy right back last night when he thought his wife, Rita Wilson was bumped by a fan. The language that came out of Forrest Gump’s mouth!

It all went down as the two-time Oscar winner and his wife Rita Wilson were walking to their car in New York City Wednesday night. TMZ cameras show that the fancily dressed couple were closely followed by a group of people as they head toward their vehicle. Rita is in a dress and stilettos and at one point it seems she falters.

Wilson seems to, “trip slightly forward, after someone bumps into her from behind. As the actress regains her footing and says, “Stop it,” Hanks turns around and puts his hands up to the group, saying loudly, “Back the f— off! Knocking over my wife?”

He finally gets in the car after Wilson and away they went. It had to be scary with a large crowd like that following them, let alone perhaps jostling them. Who knew Tom was such a potty mouth? Actually it’s good that he clapped back as it doesn’t appear the pair had any private security with them and his outburst seemed to keep the crowd at bay.

According to People, “Wilson and Hanks recently celebrated their 34th wedding anniversary, and the actress had the perfect picture to capture their marital bliss all those years ago.”

She also a photo to her Instagram Story, set to the sounds of her song, “The Best Days of Our Lives.”

Wilson and Hanks met in 1981 on the set of the ABC series Bosom Buddies. After their wedding, Wilson and Hanks had two sons, Chester “Chet” Hanks and Truman Theodore Hanks. Hanks has two children with his ex wife: Colin Hanks and Elizabeth Hanks.

Wilson was diagnosed with breast cancer and received a double mastectomy in 2015 and she told the outlet that she was “blessed” to have Hanks by her side. In 2020 they both went public with positive COVID-19 diagnoses and this week social media was speculating about Tom’s health after his arm was pictured shaking during a public appearance.

Be sure to catch up on everything happening with Tom Hanks. Come back here often for Celeb  news and updates