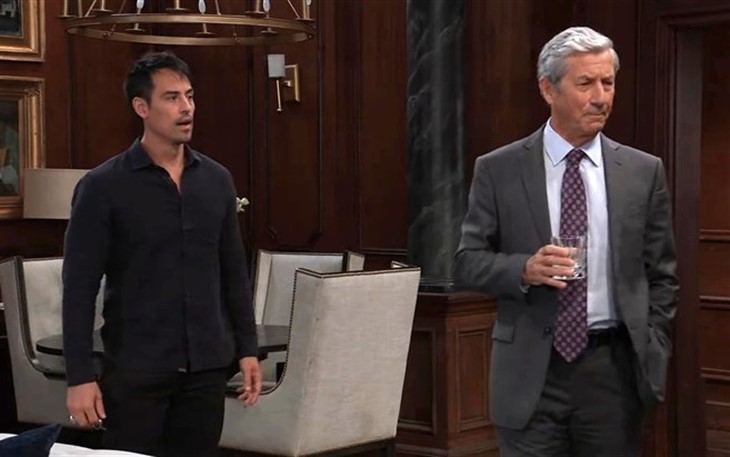 General Hospital Spoilers reveal Victor Cassadine (Charles Shaugnessy) isn’t keen on Nikolas Cassadine’s (Marcus Coloma) behavior as of late. The prince seems to think he can atone for his sins by taking responsibility for his latest oopsie — a child he has fathered with Esme Prince (Avery Kristen Pohl). However, Victor is tired of Nikolas’ childish games and isn’t interested in helping him clean up yet another mess.

Enter, Ava Jerome Cassadine (Maura West). A woman on a mission with plenty of ammunition, Ava is set to take Nikolas down, brick by brick. In fact, she wants the whole pile of limestone as it sits on Spoon Island. Victor’s interests in the Cassadine fortune align much better with Ava’s motives than Nikolas’ actions, which could squander his millions. Now that Victor knows Nikolas is going to be a father again, he’s ready to give him the boot — but how, when Vic is the one living in Niks’ house?

When Spencer Cassadine (Nicholas Chavez) showed up at Wyndemere to gather his belongings, Victor tried desperately to stop him. Spencer made it clear he was only under Victor’s supervision until he reached the last day of his original sentence, and that has come to pass. So Spencer has made the decision to move in with his other uncle, Sonny Corinthos (Maurice Benard) as a means of avoiding his father, Nikolas. Victor wouldn’t argue with that but it was only when Spencer shared that Nikolas was having a baby with Esme that Victor was stopped in his tracks and didn’t have a leg to stand on. Victor could barely bite his tongue when he saw Nikolas later.

It’s possible Victor may team up with Ava in taking Nikolas down. He’s grown tired of managing Nikolas’ poor behavior and cleaning up after him every time he destroys their family name. Furthermore, Victor wants Nikolas out of the way so he can reap the benefits of the Cassadine estate and fortune without his messy nephew mucking it up for him. Will he go back on his word and encourage Ava to use her taped confession of Nikolas coming clean about trying to kill Esme?

Speaking of evidence, Ava’s might be constructed, but the PCPD wouldn’t know that and it would be Nik’s word against Ava’s. However, Victor holds damning evidence against Nikolas, too, and none of it is made up. Victor didn’t hold back in reading Nikolas the riot act for being so irresponsible getting Esme pregnant and then holding her hostage and thinking no one would find out. When Nikolas was off at General Hospital pacing the halls in panic after Esme was brought in hypothermic, Victor was ordering Demetrius (Ari Kappatos) to clean and paint the north tower to cover up any evidence of Esme ever having been there. Of course, Victor collected such evidence for himself and is holding it for safekeeping as leverage over Nik’s head. It turns out, he’s not done with his nephew just yet. Stay tuned for more General Hospital news and spoilers to find out what happens next.