The Bold and The BeautifulSoap Opera 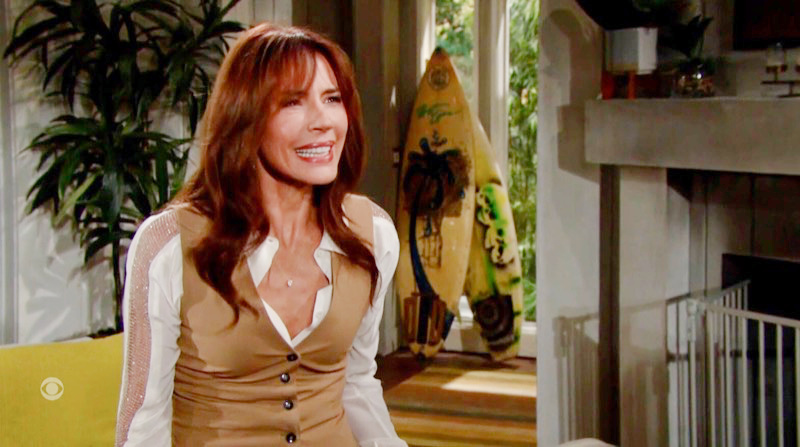 The Bold and The Beautiful spoilers reveal that Taylor will call Sheila’s bluff after they get into a heated argument over Sheila’s freedom. Bill has arranged for Sheila to be released and now she is free to terrorize Steffy Forrester (Jacqueline MacInnes Wood) and John “Finn” Finnegan (Tanner Novlan). Sheila wants to be a part of John “Finn” Finnegan’s (Tanner Novlan) and Hayes Finnegan’s (Iliana and Vienna Norris) lives at all costs.

Taylor will no doubt promise to put Sheila in prison if she has to turn herself in as well and may even call Chief Deputy Baker (Dan Martin). Unfortunately, it seems that Bill will once again come to Sheila’s defense and threaten Li Finnegan (Naomi Matsuda). Will Taylor back down or call for reinforcements? Can Sheila ever be stopped?

Katie cannot believe that Bill has aligned himself with Sheila. Bill has always hated Sheila and tried to protect the family from her. Now Bill has betrayed his own daughter-in-law and is blackmailing her for Sheila. Katie thought that Bill was a hero only to find out that he has sunken much lower than she ever thought possible.

Katie will plead with Bill to abandon Sheila and to come to his senses. Bill deserves much better than the likes of Sheila even if Katie doesn’t want to be with him anymore. Bill is endangering the whole Forrester family. Did Bill forget that he had to save Finn from Sheila a few short months ago? What is Sheila holding over Bill’s head to keep him at her beck and call?

The Bold And The Beautiful: Sheila Carter Has To Be Stopped

Sheila needs to be stopped before she goes on the attack again. Even when she was on the run, Sheila would sneak into and out of Finn’s house and even held his son at one point. Sheila shot both Finn and Steffy Forrester (Jacqueline MacInnes Wood) and left them for dead. Does Bill think simply telling Sheila to stay away is going to work?

Sheila is a wild card and could turn on Bill at any moment. Does Bill have the slightest idea what he is doing getting tangled up with this woman? Will Bill survive this alliance or become a casualty because of his ruthless behavior?

Be sure to catch up on everything happening with B&B right now. Come back here often for The Bold And The Beautiful spoilers, news, and updates.