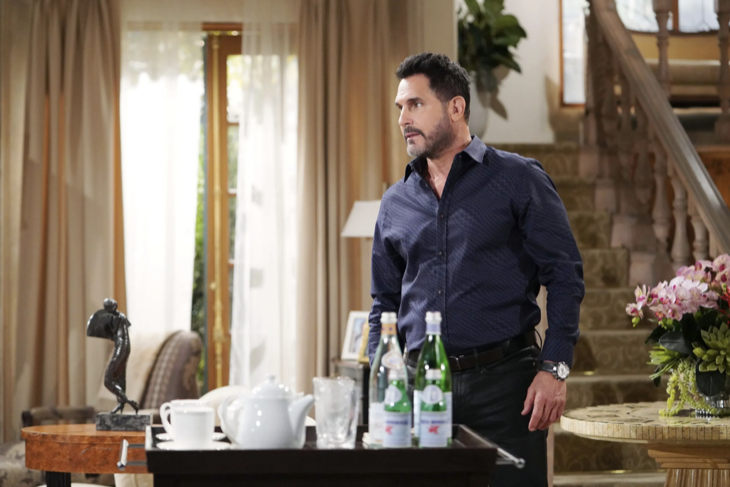 The Bold and the Beautiful (B&B) spoilers tease that Carter Walton (Lawrence Saint-Victor) will take a stand against Bill Spencer (Don Diamont) and call him out for coming on to Brooke Logan (Katherine Kelly Lang). Minutes later, he gave Katie Logan (Heather Tom) the same spiel.

Carter adores Katie and refuses to allow Bill to hurt her again. He sees Dollar Bill as nothing but a two-timing jerk.

Carter planned to sneak into Brooke’s house to get Ridge Forrester’s (Thorsten Kaye) cufflinks. He didn’t expect to overhear Bill trying to convince Brooke to give him another chance.

He listened as Bill begged Brooke to let him love her and to reunite. He wanted to come to Brooke’s defense but decided not to add to Brooke’s pain.

“Carter sees Bill as an opportunist. Of course, Bill would say this to Brooke on Ridge and Taylor’s wedding day, a day when Brooke feels most vulnerable. This is not what Brooke needs. Bill is all about Bill’s needs. Carter’s level of disgust is at an all-time high,” Lawrence Saint-Victor shared with Soap Opera Digest.

Brooke blocks Bill’s attempt at reconciliation. She leaves the room, and Katie shows up to support her sister on this difficult day. That’s when Bill switched focus and begged Katie to get back together.

“Then Katie comes in, and there is Bill saying the same things to her. Carter is beyond disgusted. He almost gives the same speech, word for word, and Carter is completely shocked at Bill’s ability to pivot. It’s gross,” Saint-Victor said.

Katie turns Bill down, suggesting they are better off apart and co-parenting their son. She finally doesn’t want Bill, and for Katie, that is progress.

Bold and the Beautiful Spoilers—Carter Rages At Bill

After Katie turned Bill down, Carter showed himself. He tells Bill he can’t treat people like this, especially women he claims he loves.

“When Carter speaks up, this is when Bill realizes that Carter is really into Katie. Carter has never confronted anyone like this before; hopefully, the viewers will see what he is made of. Katie has been hurt too many times by this man, and that’s what motivates Carter to be the hero and put a stop to Bill’s romantic pleas,” Saint Victor explained.

It sounds like Katie and Carter will take their relationship to the next level. B&B fans, do you think Bill will listen to Carter? Keep watching Bold and the Beautiful to see what happens next week between Carter and Bill.