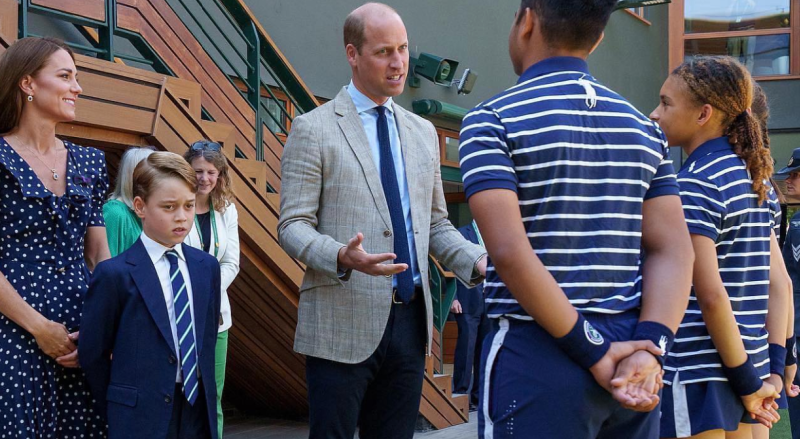 Prince George is eight years old, and he’s growing into a really nice-looking boy, his admirers agree. Recent news reveals him preparing for his summer break from school, and he went to Wimbledon. Folks heard that his dad and his mom already watched some of the matches. Certainly, it seems that like his dad, Prince William, he can’t keep his animated emotions off his face during the tennis games.

Prince George Enjoys Wimbledon With His Mom And Dad

Those who love the royal family seem very taken with Kate Middleton’s oldest son. While his young brother’s antics amuse them, as he grows a bit older, fans see a resemblance to his dad in George. Actually, Prince Harry’s kids also seem very cute, but some folks think it’s a terrible shame they don’t get to spend much time with their cousins. Anyway, that’s another story for another time, and the focus this week was on the late Princess Di’s oldest grandson.

Prince George sat between his mom and dad at Wimbledon on the weekend and they watched the men’s singles finals together. Last week, when Prince Willaim watched, many people thought that he got so worked up when a player dropped a point, that he might have said a naughty word out loud. Mind you, even if he did, not too many people seemed upset about it. After all, that makes them feel something in common with the future monarch. Now, the animated face of his son seemed to indicate he also got into the excitement of the game.

The New York Post wrote a story about how the young boy seemed very “spirited” as he watched the tennis match. One photo showed him peeping with one eye, as he couldn’t bear to watch the outcome of a point. Meanwhile, another photo showed him clearly wrinkling his nose with disappointment. When Page Six shared the photos on Instagram, the outlet directed fans to the original article.

Fans of Prince George took to the Instagram comments to chat about the photos.  However, a lot of people were really upset because one of the photos showed the young prince picking his nose. Here’s what some of them said:

Now why the hell somebody gotta take his picture picking his nose?? Come on, give the kid a break, everyone does it but you don’t have to post a pic of it!! NO CLASS! Tacky photographer! 🤬

Was it really necessary to post the image with the finger in his nose?! Seriously, it’s like we refuse to learn anything!!!!!

Why post this picture of a young boy? Give him a break.

God, that photo is going to be displayed for the rest of his life. 🥴”

Why The Obsession With Looking For Fault?

Prince George looked super-cute in all the other photos, so it seems that fans grow irritated with the media making a big thing of him packing his nose. In fact, as far back as 2018, articles came out about it. Plenty of kids across the entire world do the same thing as youngsters. So, one fan wrote, “You didn’t need to post that pic…he is a kid….”

Then another one wrote, “Why??? Seriously can’t you be kind to a kid. #photographerisanahole.”