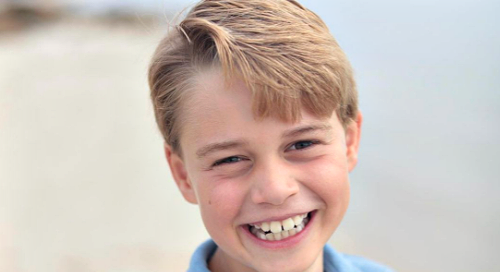 Prince George inherited a lot of his grandmother’s attractive features and just like Lady Di, he becomes increasingly popular. Not for just his handsome looks, but for his personality. The young king-in-waiting certainly seems like a nice young kid and he has a great role model in his dad, Prince William. Additionally, his mom, Kate Middleton seems like a sweet parent with her nine-year-old son. And at the tender age of nine, he’s becoming something of a powerhouse when it comes to trend-setting.

Prince George Gets A Lot Of Attention From The British Public

Whilst many people feel that the monarchy is outdated, few people find much to criticize about the young prince. In fact, when the media shared photos of him picking his nose at Wimbledon, outlets were slammed for it. After all, he’s still a little kid and there were so many other sweet photos available that day. Millions of people watched the games play out, and a lot of them seemed pleased to see his dad’s mini-me getting engrossed in the exciting matches.

Whether Prince George is in the limelight at Wimbledon or helping out with lambing during his school break, people see a nice you boy who seems willing to turn his hand to anything. Nevertheless, when he arrived courtside, some people complained because he wore a suit with a tie. Bear in mind that his mom, Kate Middleton, is a patron of the All England Lawn Tennis Club. Meanwhile, his dad, The  Duke of Cambridge is second in line to the throne. So, their son could hardly arrive at the game in a hoodie with his cap on backward.

Prince George Sets A Fashion Trend In The UK

According to the royal family commentator, Neil Sean, the popular kid opted to dress just like his dad. Clearly, he is very fond of his father, who manages to always look good in public. Of course, William wore a suit with a tie, so it seemed rather sweet that his son wanted to twin with him. Well, it turns out that the young prince is setting a trend in clothing stores. In fact, suits are expensive, so retailers are asking for cheaper cuts that look good.

Prince George apparently just set a trend with young kids who want to ditch ripped jeans and look smart. So, the fashion industry is responding to public demand. Imagine being just nine years old and a single outfit worn in public sends sales of a clothing line rocketing in sales. Soon, it seems likely that the UK will return to a respectable-looking community, with loads of polished kids in blazers and ties.

One unnamed fan commented on YouTube, “Prince George is so adorable. It is not surprising that the Royal Guards played Happy Birthday. What is wrong about a little boy wearing a suit. People have gotten slovenly these days.”

Another person who liked the new trend, Lisa Cash, wrote, “Prince George is such a handsome little fella! I enjoy seeing him all dressed up you don’t see kids dressed up like that hardly anymore! Thank you Prince George !”

What do you think about the young prince becoming a trendsetter in fashion? Shout out your thoughts in the comments below.

Should There Be A Dedicated Arrest Channel For Bad-Apple NFL Players?