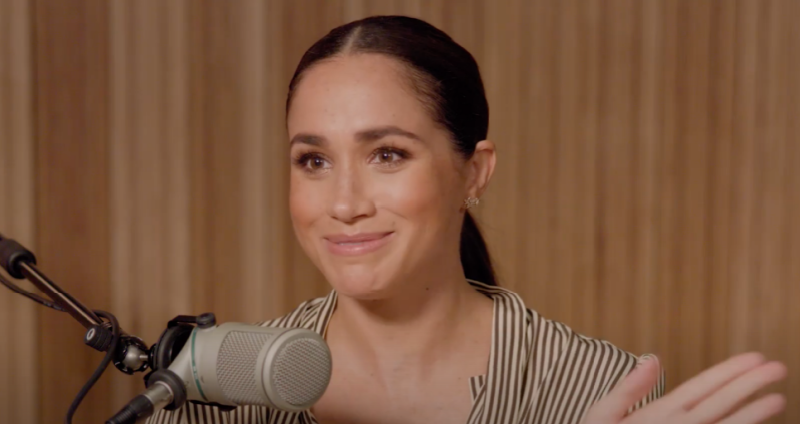 Meghan Markle finds plenty of people to slam her on social media. Additionally, the tabloids ride a wave of stories that make her look selfish and cunning. In fact, some people claim they would rather watch paint dry than ever hear from her again. However, her first podcast on Spotify seems to counter those claims. Actually, it topped the platform’s international podcast list for days.

Those who follow the royal family claim that they want less news about Prince Harry and his wife. Over on Twitter, people complain that they want more news about Prince William and his family. In fact, a survey from last year revealed that people felt happier about taking out the garbage rather than ever reading about the Duke and Duchess of Sussex again. Well, for someone that many people wish would evaporate, she scored a remarkable number of listeners and managed to top the charts on Spotify in more than one country.

Meghan Markle, like any celeb, has detractors and fans. So, Team Sussex is around to cheer her on. In fact, when Lady Antonia Fraser said that wished the Duchess would “shut up,” fans slammed the historian and author. And, it seems that millions of folks across the world consider themselves Team Sussex. After all, who could be bothered to tune in to the a’Archetypesa’ podcast if the former Suits actress really bored them?

Critics might suggest that it was Serena Williams who pulled in the numbers. Meanwhile, others might suggest that a lot of top podcasters left when Joe Rogan started up. However, does anyone in New Zealand, Ireland, or Australia really care about Joe Rogan? If you don’t know, the podcast sits at number 1 four days after its debut. People Magazine reported on August 25, that it started trending immediately. Additionally, it held the top rank in the “United States, United Kingdom, Ireland, Australia, New Zealand, and Canada.” And, it still sits up there on August 27.

Meghan Markle titled her first podcast on Spotify, “The Misconceptions of Ambition.” Judging by the outcome, she certainly seems to have finally reeled in something that works for her. Apparently, fans will get to know the real woman through her podcast, rather than the one painted in seven colors of something nasty by the media.

The podcast by Meghan Markle started taking off in India as well. By August 27, it had risen to #3. @Starrup2 shared the news on Twitter, noting, “In a country of over a Billion people our girl Meghan jumped 20 spots in India to #3 Yeah!!!!@ God is good. #ArchetypesOnSpotify #Archewell #Archetype.”

Perhaps Prince Harry’s wife isn’t as boring as critics claim she is. What are your thoughts? Sound off in the comments below.