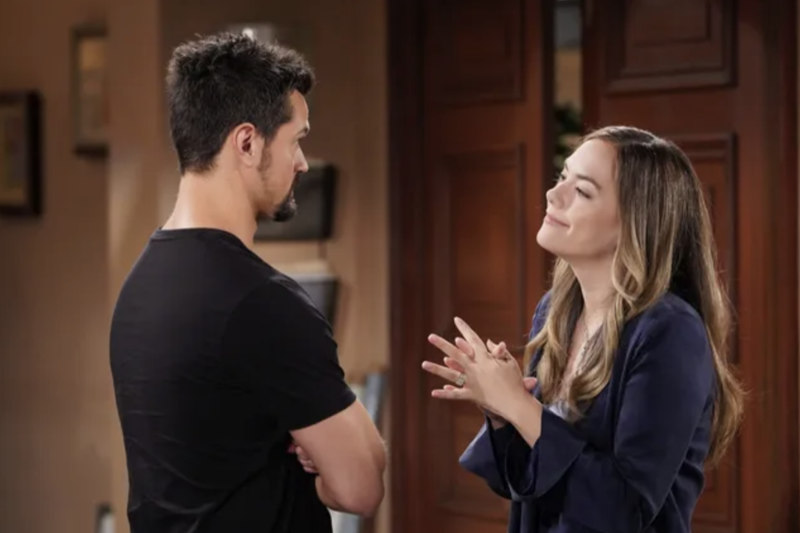 The Bold and the Beautiful spoilers document that Hope Spencer (Annika Noelle) is experiencing something she never has before. Thomas Forrester (Matthew Atkinson) caught her eye. That troubles hardcore B&B fans.

The potential for one of the more mind-boggling twists in recent memory appears to have Hope starting to fall for Thomas. Heads will explode on both sides of the screen if that connection happens.

Bold And The Beautiful Spoilers – Thomas Forrester Is Bad

Oh, Hope told Thomas in the past that he is nice to look at. But she has always been in such deep love with Liam Spencer (Scott Clifton) that it appeared Thomas never had a chance with her.

Thomas has often claimed to be in the process of working on himself, pursuing redemption, or some such nonsense. This self-indulgent cad thinks of himself twenty-four-seven.

It is reasonable to assert that Douglas Forrester (Henry Joseph Samiri) is loved by Thomas. But Atkinson’s character also sees Douglas as a younger, shapable version of himself.

Hope can be stubborn, and she can be bold. But would it be believable to believe that she is so gullible that Thomas can charm her into a relationship that would betray Liam’s trust and potentially break their marital tie?

Using the naive angle is an option TPTB could use. As Liam and Brooke know, Hope wants to believe the best about other people. That is why she is eager to believe that Thomas has changed and is championing his cause.

The bond between these co-parents was established by Thomas so he could gain regular access to her. That happened, and after a few years of delay, Thomas’ initial intentions could be yielding fruit.

Liam never stopped distrusting Thomas. Clifton’s character did acknowledge that Thomas seemed to have stabilized, but that did not prevent Liam from always keeping an eye on his long-time nemesis.

However, Brooke’s latest marriage crisis caused Liam to stop his mother-in-law from drinking. He feels compelled to help Brooke deal with Ridge’s strange break from her. Doing so leaves an opening for Thomas, as Liam can not maintain full focus on Hope.

Thomas’ orchestrated con job against Brooke was meant to cause chaos. A side effect is drawing Hope to Thomas, with viewers preparing for what was formerly impossible on B&B.