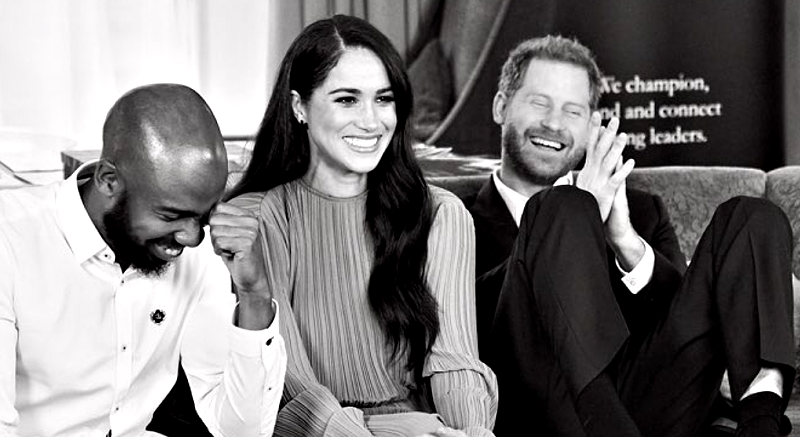 Meghan Markle and Prince Harry might always sit at the center of a storm of controversy. However, one undeniable fact is that they make beautiful children together. This week, when fans saw a photo collage of Meghan, Harry, Lilibet, and Archie, plenty of fans loved it. Furthermore, agreeing that the kids seem very sweet, others lamented that there are always horrible stories about them in the media.

Lots of bad press comes for the couple who tied the knot in March of 2018. Well, the fairytale joy of fans soon faded away and the bad press began. That is not to say they were blameless. After all, some nasty insinuations emerged during the infamous Oprah Winfrey interviews. Haters and detractors look for reasons to slam them and recently. Harry gave them an opportunity to do just that. Actually, that came when he criticized the “rolling back of constitutional rights” in the United States in a speech to the United Nations General Assembly,” the Independent wrote.

Actually, many people think that Meghan Markle controls her husband, so they gloat about that. Sometimes, it’s almost as though detractors can’t wait to hear that their relationship fails. However, it might disappoint them to hear that Darren Stanton, a body language expert says they are clearly still in love. And, deeply. Now they have two gorgeous children, many fans wish the hate would stop. However, at least few people could truthfully say that their kids are awful. So, the photos posted this week were well received.

The collage of pictures on the account of @meghan_la_duquesa showed the Duchess of Sussex as a little girl. Possibly, she had already gone through Pre-K, but she wasn’t much older than that. Probably, it was taken in Los Angeles, her place of birth. Possibly, the photo came within a year or so of her mom and dad’s preparation a few years before their divorce. Did that cute little girl dream of one day becoming a princess?

The caption noted that next to Meghan Markle was a very young Prince Harry. Of course, that distinctive hair coloring makes him unmistakable. In fact, when he was a child, fans from across the world adored Lady Di’s little darling. In his little checked shirt, with his prominent baby eyes, the royal toddler made fans post up heart emojis.

Meghan Markle and Harry welcomed their son, Archie Harrison Mountbatten-Windsor in 2019. Great-grandma, Queen Elizabeth met him a few days after his birth in London. In the last photo, royal fans saw, Lilibet Diana, named after her grandma and her great-grandmother. Fans compared the photos and decided that Lili really takes after her dad. One of them commented, “Lili looks just like her dad.”

Others talked about Megah Markle and one of them compared her to a “little Cabbage Patch Doll!!”

While some people thought that Lilibet took after her grandmother, Lady Di, others thought that she resembled the Queen. Meanwhile, others hoped that a slightly older photo of Archie could be posted up. With his face turned to the side, it’s not really all that clear whom he looks like the most. But one thing fans agree on, the couple makes beautiful children.