General Hospital Spoilers: Esmé is Dead — and Her Twin is Pregnant 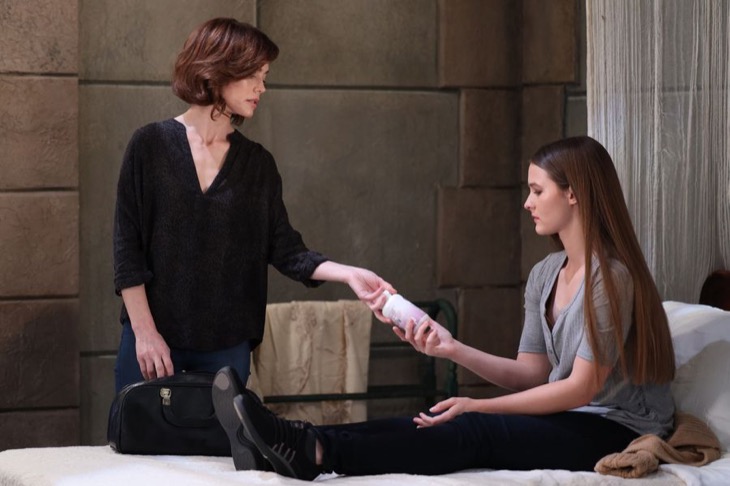 General Hospital spoilers tease Esme Prince (Avery Kristen Pohl) surprised Nikolas Cassadine (Marcus Coloma) when she showed up at his door at Wyndemere months after she went over the parapet and plunged into the icy waters below. He was certain that she wouldn’t have survived the fall, despite the numerous times others have.

That parapet is a popular place for executions! When Esme popped up on Spoon Island, Nikolas was quick to phone the PCPD until she showed off her belly and dangled the leverage she held over his head.

As soon as Nikolas came to realize Esme wasn’t playing around and really was pregnant, he knew he was going to need to take desperate measures to get rid of this problem — and killing his unborn child wasn’t going to be an option. Weeks later, he still has Esme trapped in the north tower of his castle, and he’s enlisted a friend to support him in his hostage situation. But little does Nikolas know, Esme didn’t survive that fall. So who is in the north tower, and whose baby is she carrying?

Ryan Chamberlain (Jon Lindstrom) and Heather Webber (Alley Mills) have now revealed they were once lovers. Many years ago, Heather left Ryan heartbroken and lost without her, and without any explanation for why she took off. Heather confronted Ryan, but she never expected him to know she had been pregnant when she left, and soon, she’s going to piece together the reality that the only way he could know is because he’s met them. Yes, them. When Ryan told Heather she owes him two — not one — some fans speculated that she might have left him in the lurch while toting twins away in her womb. If that’s true, where is child number two?

Nikolas might think he’s off the hook when he finally realizes Esme has a twin who has been playing him since the day she showed up at Wyndemere, and that might even be true. The problem is, the day she knocked on his door with her pregnant belly is far from the first time she showed up there. Esme and her twin sister were playing everyone the entire time. If it seems like Esme knew everything Spencer Cassadine (Nicholas Chavez) was up to all the time, it’s because she did.

She was able to torch Ava Jerome Cassadine’s (Maura West) car and deal with her dear old dad at Spring Ridge while also keeping a close eye on Spence and his behavior while she was away. As it turns out, that tryst Nikolas had was never with Esme, but with her sister! Sorry, Nik! You’re still going to be a daddy to the late Esme’s niece or nephew. Keep checking back with us for more General Hospital news and spoilers as we continue to dish them out!