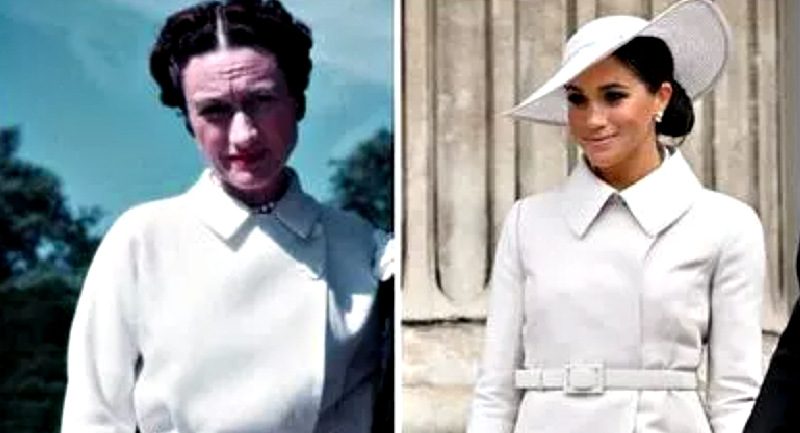 Meghan Markle celebrated her 41st birthday last week, and the royal family showed a lot of grace when they sent in their congratulations. Bear in mind, she seems bent on not getting along with Harry’s family. Not to mention that she said some rather harsh things about them in the past. However, folks might wonder why the Duke & Duchess of Cambridge shared a photo that more than channeled Wallis Simpson’s style.

Ever since Prince Harry walked down the aisle with his American bride, comparisons were made to Wallis Simpson. Obviously, that came because like Wallis, the actress was not from England. Additionally, like Harry’s wife, people wondered what the prince saw in her. Back in the day, Wallis was seen as rather too common a person to be involved with King Edward VIII. So, the media at the time slammed her, vilified her, and generally dished as much scandal as they could about her.

Meghan Markle, like Wallis Simpson, will probably get heat from people for the rest of her life, and it might be a monumental undertaking to ever clean up the mess.  Apart from the infamous Oprah interview where Meghan and Prince Harry brutally slammed the Royal Family, there’s a ruckus because rumors have it that Harry wants to go home but she allegedly won’t allow it. Actually, it doesn’t matter what she does, like her predecessor, Wallis, everything she does is nitpicked by the media.

Apart from the fact that the Duchess of Sussex sparked a massive debate about race, many people notice the similarity between her dress and that of Wallis. Probably, you can recall the lotus print. Back then, US Magazine noted that some folks even compared her hairstyle with the center parting to that of King Edward’s wife. However, the outlet mentioned that there were also some obvious differences, including the length of the sleeves. Additionally, the lotus was only on one side of the dress and not all over it.

Whilst some critics slammed Meghan Markle for “stealing” the style, that didn’t stop her from wearing another dress that seemed to be borrowed from Wallis. Instead, she seemed to deliberately wind up the public again in 2022. It came when she and Prince Harry went to the UK for the Queen’s Platinum Jubilee. When they went to the Thanksgiving Service at St. Paul’s Cathedral, she found criticism for her “nurse” style. But, the dress was almost identical to one that Wallis wore decades ago.

More Than Channeling? The Duke & Duchess Of Cambridge Post

When Meghan Markle turned 41, Prince William and Kate Middleton posted up on Twitter in honor of the occasion. Whilst that seemed very noble and all that, people dished some heat because they chose the photo of the white nurse-style outfit.

Here’s one example of the reactions:

Perhaps Meghan Markle means nothing untoward by enjoying the style that Wallis liked. However, the mood about the royal family on social media suggests that everything is interpreted as underhanded.  So, it might make people wonder why the Duke & Dutchess chose that photo for her birthday. Is that a subtle hint that they think like Wallis, she’s an upstart and a commoner who stole a royal away from “The Firm?” What do you think? Sound off in the comments below.