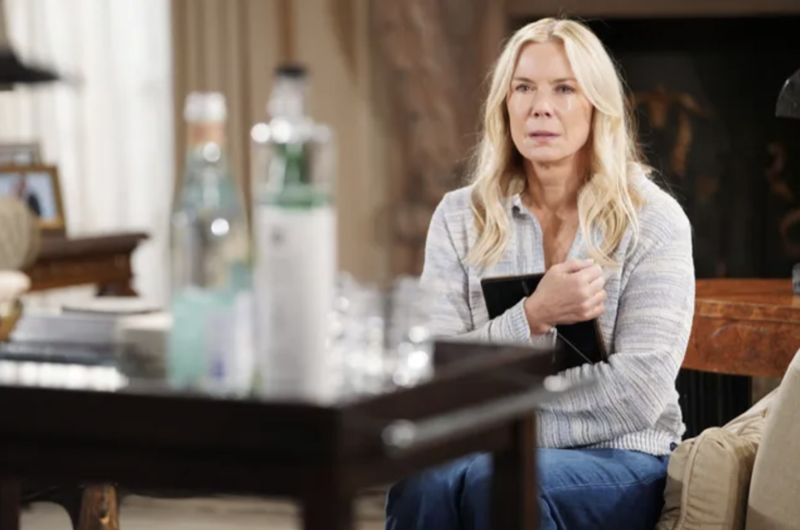 The Bold and the Beautiful spoilers document that Brooke Logan Forrester (Katherine Kelly Lang) refuses to believe that Ridge Forrester (Thorsten Kaye) represents her past. She sees Deacon Sharpe (Sean Kanan) and Bill Spencer (Don Diamont) as fond reminders of yesterday instead.

Deacon’s heartfelt engagement ring offer was rejected. Brooke was appreciative and acknowledged that Deacon’s love for her was real.

Bill followed Deacon to the mansion. He also heard no. Like Deacon, Bill heard Brooke say that Ridge is her husband.

Bold And The Beautiful Spoilers – Ridge Forrester Is Not Over Her

The her is Brooke, not Taylor Hayes (Krista Allen). The last declarative sentence is sobering, with no pun intended toward Brooke or Deacon’s addiction issues.

Taylor should be the woman that Ridge has been thinking of. She is the one who he should have been longing for.

But viewers know that Ridge does not consider Taylor the woman he could not get over. No, that was, is, and may always be Brooke. Yet, that does not necessarily mean this couple will survive.

Hope Spencer (Annika Noelle) did not expect her father to pull a ring box out, open it, and pledge his life to Brooke through a marriage offer. But he did, and Brooke was touched, crying during the genuine offer to be loyal to her.

Deacon is the poor soul in this storyline. Brooke and Hope do not know that he is being held hostage by Sheila Carter (Kimberlin Brown) or that he seems to have developed some form of level two feelings for her, meaning ones below what he has for Brooke.

If Brooke can not keep her marriage from being annulled, then she will be alone. But accepting Deacon’s standing marriage offer seems the less likely choice she would make.

Bill was Brooke’s last husband before Ridge. Her backstory includes one marriage to Bill, with Ridge beating him by seven in that nuptial count.

Bill has money and power, as compared to Deacon. But Brooke has wealth and a gorgeous mansion. So, she could have Deacon move in if there is an unexpected change of heart in the future.

Yet, Brooke’s pleas for Ridge to return to her could be realized. That becomes possible if Thomas Forrester’s (Matthew Atkinson) digital frame breaks. The sooner that happens, the more likely it is that Ridge reverses course and walks back his pledge to be with Taylor on B&B.