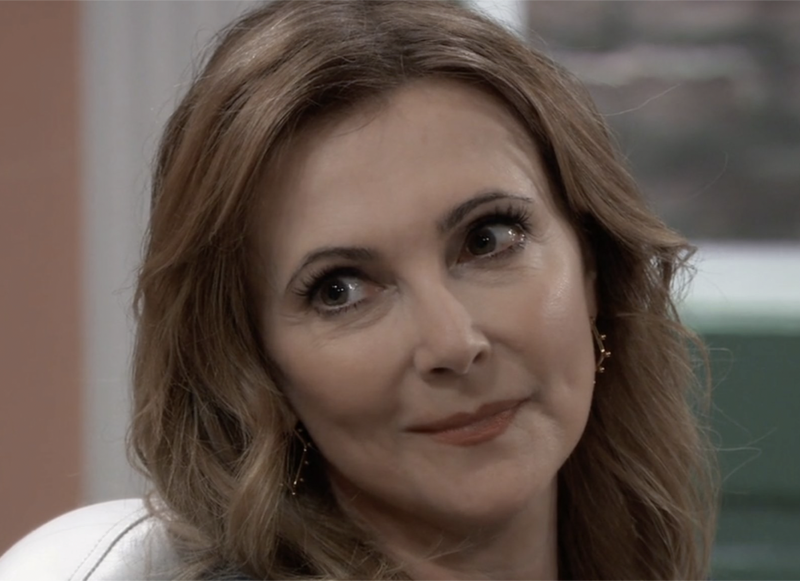 General Hospital spoilers reveals Holly Sutton (Emma Samms) seemed to manifest right out of thin air the day Lucy Coe (Lynn Herring) was shot on the pier. At the same time that Lucy seemed to go missing, Holly appeared in the Quartermaine boathouse, having washed up in the water. Few people have questioned this as of yet, but that part is coming. Why isn’t Holly concerned with where she’s been for the past two years? As the dust settles, her friends are going to become suspicious that all is not what it seems with Ms. Sutton.

While the PCPD forensics team has been busy analyzing every snippet of footage from Victor Cassadine’s (Charles Shaugnessy) drone for hints that it could be doctored, several members of the force have their hands full trying to clear Anna Devane’s (Finola Hughes) name of the crime at hand. When the results come in, they could clear Anna right away, but word on the street is it won’t be nearly that simple. It’s far more probable that forensics will say the footage is authentic and has not been altered in any way. This will leave the PCPD with a tough case to crack since they currently only have their personal feelings on the record to vouch for Anna’s innocence. For Robert Scorpio (Tristan Rogers), he is going to start feeling torn between two very important women in his life as he realizes one of them may not be who he thought.

GH Spoilers Indicate the Footage May Not Be Altered, But the Body Could Be

Would Victor go so far to frame Anna that he would hire someone else to physically alter their appearance for the sake of looking just like Anna? Could that be pulled off without extensive plastic surgery? Possibly — especially if the footage was messed with. Certainly, Victor might even be able to pull off letting forensics think the footage wasn’t doctored because he could have plants within the PCPD right now for just this kind of situation. Is it possible Holly was the real British WSB agent who showed up and shot Lucy in cold blood, and Victor just made it look like Anna?

General Hospital Spoilers — Holly Isn’t Who Robert Thinks She Is

As they continue to investigate this case together, Robert may start to notice quirks about Holly that are missing, or other parts of her personality that don’t add up. Is she only missing the last two years of her life, or are there other parts of her memory that also aren’t in place? Robert is the perfect person to test her knowledge of her alleged own life. When he starts taking note that Holly doesn’t even recall experiences and private moments the two of them had together, he’s going to grow suspicious of the person who washed up at the Quartermaine’s, but he won’t let her know that just yet. Stay tuned for more GH news, updates, and spoilers just ahead.