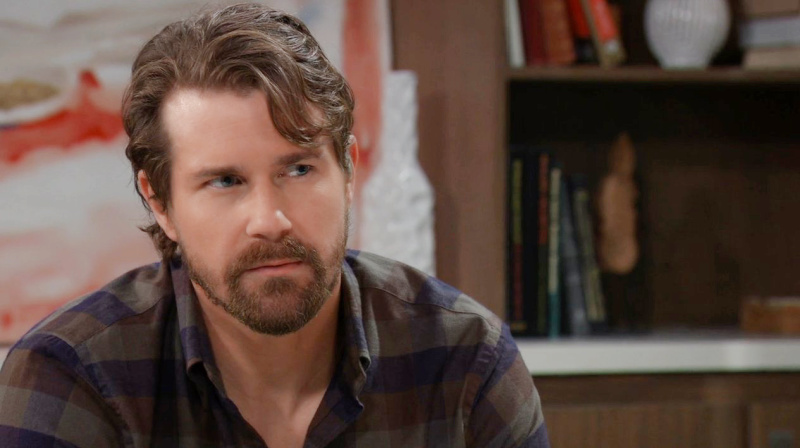 General Hospital spoilers tease Cody Bell (Josh Kelly) has had Leopold Taub’s (Chip Lucia) necklace on his mind for longer than anyone but Dante Falconeri (Dominic Zamprogna) knew who Cody was. He came to town intent on gaining access to the necklace and immediately swindled his way into a friendship with Britt Westbourne (Kelly Thiebaud). Somehow, Cody already knew that Peter August (Wes Ramsey) had left the necklace in his last effects, which went to Britt as his next of kin. He expected a few hurdles on his journey to becoming a multi-millionaire, but now he’s got bigger problems since the necklace might go to Liesl before he gets a chance to claim it.

Cody was expecting a quick turnaround. He was intent to spend a few months in Port Charles working out the details before he got the necklace and went on his merry way. However, it took him longer than he expected to crack Britt’s tough exterior and get close enough to her to convince her to open Peter’s safety deposit box. In the process, he’s fallen for Britt — which is something he never intended. When she reveals she is suffering from Huntington’s Disease that is progressing rapidly, Cody will be sad but also won’t be able to help but worry that Britt will die before she can hand over the necklace.

In reality, a lot more is involved in transferring ownership of the necklace from Britt to Cody than simply handing it over. While there’s no way to make him prove he is Leopold’s son, everyone seems to accept it at face value while under the assumption that Mac Scorpio (John J. York) isn’t his father. Cody has never been great at timing. He says the most abrasive things that turn Britt off and make her second-guess why she’s spending her time with him. When he asks about the necklace and whether she will pencil in time to ensure she takes care of transferring it to him before she passes away, Britt will feel he’s being so insensitive and selfish.

General Hospital Spoilers — What Will Become of the Necklace?

If Britt does pass away soon from Huntington’s Disease, what will happen with the necklace? Soon, law enforcement is going to have to investigate the necklace to make sure no part of it has been stolen since it contains remnants of the Ice Princess diamond. How might the police come to find this out? Word on the street is Victor Cassadine (Charles Shaugnessy) is going to report it to the police — or make Holly Sutton (Emma Samms) do it — so that the necklace is transferred out of the safety deposit box, thereby giving him more of an opportunity to steal it.

If he is successful, how will the investigation into finding it pan out while Britt is withering away, and how will Cody feel about it? If Britt dies while she’s still owner of the necklace, it will bequeathed to her next of kin, Liesl Obrecht (Kathleen Gati). Liesl is far from a fan of Cody’s and could withhold the necklace just to spite him, at the least making it a difficult legal battle for him to pursue ownership of it. Plus, since he has no proof he is Leopold’s son, Liesl might not operate on the honor system the way Britt is willing to. Where will that necklace end up? Keep checking back with us for more General Hospital news, updates, and spoilers as they become available.