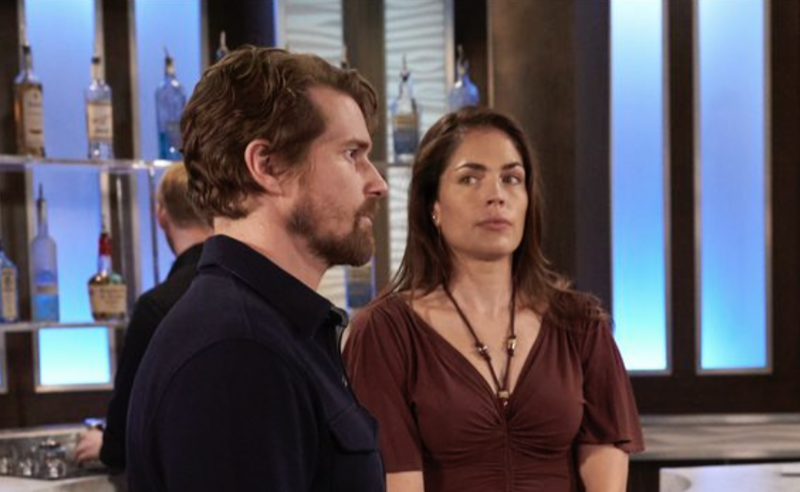 General Hospital spoilers reveals to be frank, Sam McCall (Kelly Monaco) and Britt Westbourne (Kelly Thiebaud) have never been besties. Just because their love interests have ties to each other doesn’t mean they ever will. In fact, Britt’s most recent love story ended with Jason Morgan (Steve Burton), which is Sam’s ex, choosing Carly Corinthos (Laura Wright) — one of Sam’s actual best friends — over Britt. Suffice it to say the two aren’t close. So it’ll come across as a bit strange when Sam tries to imply Britt should back away from Cody Bell (Josh Kelly) while she still can. How will Britt respond, and what is Dante Falconeri (Dominic Zamprogna) going to think of his girlfriend’s meddling ways?

Up until a few days ago, Sam and Cody jived just fine. He seemed like a decent guy, and if Dante was vouching for him then Sam had no concerns. It seems like her PI radar didn’t pick up on this one. But recently, Sam sat down with Damian Spinelli (Bradford Anderson) to discuss his venture into the dating service world as the new owner of Society Setups. Spinelli confessed his dilemma to Sam and that Cody was blackmailing him.

This has changed Sam’s perception of Cody, but she doesn’t feel like she can tell Dante the truth or she risks jeopardizing Spinelli’s safety. Dante might keep the secret for her, but she doesn’t want to put him in that position. Sam went on to chat with Cody and while he aimed to assure her he wasn’t seeking anything else from Spinelli, he also became away Sam intended to keep all of this from Dante. Cody could come back to use that against Sam at some point, so she might be wise to stay on his good side. Too late!

Dante is going to pick up on some subtle cues from Sam that she doesn’t bother to hide all that well about her shifting opinion of Cody, and it might leave Dante feeling unnerved. Knowing that Cody also holds a secret about his past, and that he did Dante a huge favor in covering for him and taking the blame for a crime Dante committed, it’s hard to say how this will end up. Cody seems to have everyone right where he wants them. Either way, Dante is going to struggle to comprehend why Sam suddenly doesn’t care for Cody.

Sam and Britt are going to have time to chat as well soon, and the conversation will be everything Britt never expected. As Sam hints around to Britt possibly being better off moving on in the opposite direction, Britt is going to have some pointed questions about her motives. Britt already questioned Dante about whether or not he was comfortable with Cody dating her, and now it’s going to come across to Britt as though Sam has a bone to pick with her, too. It won’t occur to Britt that Sam is actually looking out for her — not Cody. Stay tuned for more GH news and spoilers coming your way.