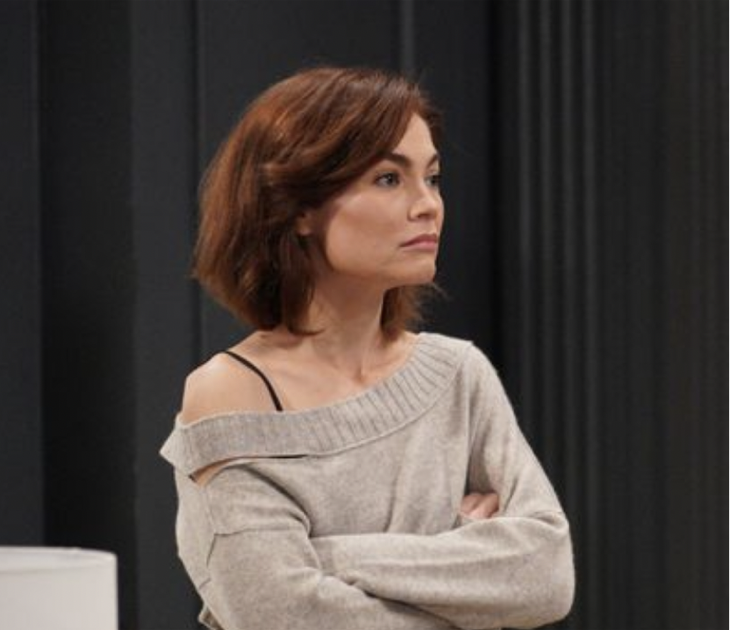 General Hospital (GH) spoilers for Thursday, November 17, 2022 tease Dr Britt Westbourne (Kelly Thiebaud) is sitting with Brad Cooper (Parry Shen), having drinks at the Metro Court where she forces him to toast as she announces,”Tonight we gonna raise a little hell!” What could Brit be planning that involves her BFF, Brad?

Samantha “Sam” MacCall (Kelly Monaco) runs into her new love interest, Detective Dante Falconeri (Dominic Zamprogna) at the PCPD. Whatever she needs to discuss with him, seems that it needs to be done behind closed doors. What is Sam up to and will Dante go along with her schemes?

Selina Wu meets with someone, suggesting they have more in common than they’d even realize. With Selina having as many friends as she does enemies; who could she be turning to that would be willing to work with her on her latest plans.
Laura Webber Collins (Genie Francis) raises her eyebrows in concern, asking if there is something they know that she is not aware of. Could Laura be speaking to Selina, or is Laura about to find out some other disturbing news? Possibly something on Spencer Cassadine (Nicholas Chavez) or that Esme Prince (Avery Kristen Poh)l is back in Port Charles?

Robert Scorpio (Tristan Rogers) sits with Holly Scorpio (Emma Samms), as they discuss friendships. Robert warns her that friendships are serious business and so is betrayal. Is Robert confronting Holly about her working against him, wanting to know what her agenda is working with Victor Cassadine (Charles Shaughnessy)?

Mob Boss, Sonny Corinthos (Maurice Benard) has taken care of Sasha Gilmore Corbin (Sofia Mattsson), pretty much since she came to Port Charles and had a relationship with his son, Michael Corinthos (Chad Duell). Things really took a toll on the friendship when she fell in love with his cousin, Brando Corbin (Johnny Wactor). Sasha spends the day marking a sad milestone in her life and Sonny seems to be the shoulder she prefers to lean on at the moment. Sonny ends up confronting her asking, “She blocked the deal, didn’t she?”

Nurse Elizabeth Webber (Rebecca Herbst) rushes to Windemere when Nikolas Cassadine (Marcus Coloma) says he desperately needs her help. Upon arrival, they both find pregnant Esme Prince lying unconscious on the ground of the room, Nik locked her in. Liz approaches Esme, very worried and tells Nik that they need to call an ambulance. Will Nikolas follow Liz’ orders?

Be sure to tune into ABC’s General Hospital (GH) on Thursday, November 17, 2022 to catch up on all these exciting stories and so much more happening right now in Port Charles. Check Celeb Justice often for GH updates, news, rumors and spoilers!

Cris is a homemaker who has been watching General Hospital for 40 years. She is very knowledgeable on all four of the daytime soap operas and loves sharing her opinions and views on them. She thoroughly enjoys writing about spoilers, rumors, news and any updates on the shows, as well as the characters and actors/actresses.