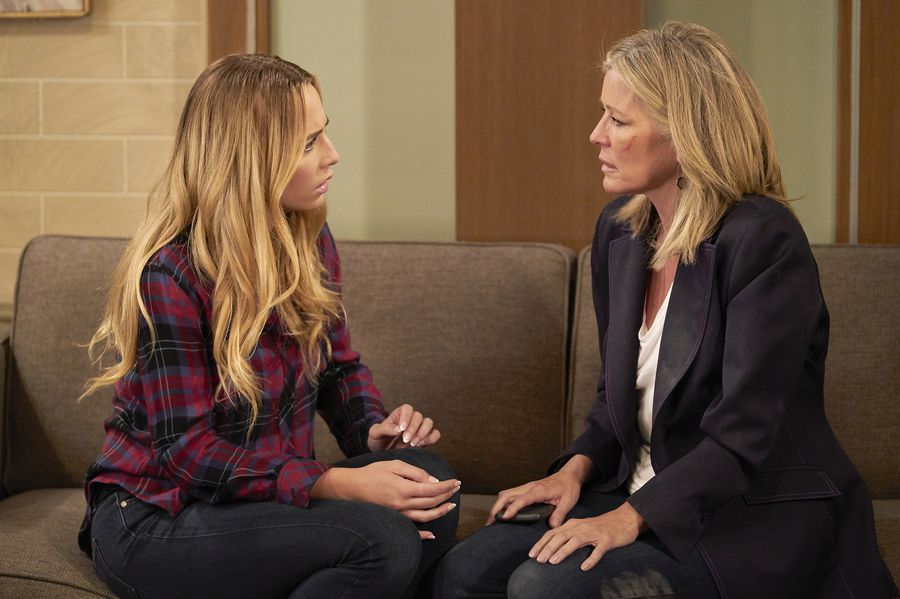 General Hospital spoilers tease Carly Spencer (Laura Wright) is going to be a grandmother again! It’s not exactly new news, but she’s excited nonetheless to watch Willow Tait’s (Katelyn MacMullen) belly grow and know that her son, Michael Corinthos (Chad Duell), has found such a good woman to spend his life with. Carly’s life is finally taking a shape she can recognize.

It’s been a bumpy ride since she divorced Sonny Corinthos (Maurice Benard) and subsequently lost half of the Metro Court Hotel to his mistress, Nina Reeves (Cynthia Watros). She has a new man in her life, and things are moving along swimmingly. If only she could stop stressing over the pain of watching her teenage daughter make mistakes and learn from them. Carly definitely isn’t expecting what happens next for Josslyn ‘Joss’ Jacks (Eden McCoy).

When Joss has to tell her mother she’s pregnant, her whole world will go pear-shaped. She’s not sure if she ever wanted to have children; she always saw herself as a career-oriented woman. Her future is not being mapped out for her and she’s not sure she wants anything to do with it. Will Carly be able to support her through this process without losing her head? How is Jasper ‘Jax’ Jacks (Ingo Rademacher) going to react? Moreover, how will the father take the news — and does he know?

Therein lies the other problem — Joss isn’t sure about who the father is. This is going to stun Carly, who always taught her daughter to be more proactive about protective sex. Although Joss was never intending to be careless, she is now facing the result of what can happen when you start one relationship before you end the last one.

Not only does she have to tell Cameron ‘Cam’ Webber (William Lipton) that he may be a father soon, but she also has to tell him he might not, and that she cheated on him with Dex Heller (Evan Hofer). Further, she gets to tell Dex he could be the father as well. Will both of them take the news well, or is Cam going to be just as rattled as Joss is about the start of his adult life being tainted by this baby that could hold him back? Will Dex understand how Joss feels when he still barely knows her in comparison to Cam?

She isn’t ready for this. She’s living in the dorms with a roommate and sleeping in a twin bed. She doesn’t have the means or space for a child, and she’s not ready to grow up yet to the level that a newborn baby demands. If she drops out of PCU, she will never be back on track with her friends, and her plans for medical school will have to be put on hold for some time.

As Joss sees the future she thought she would have slipping away, will she decide now isn’t the right time for a baby? As controversial as it seems, abortion is a hot topic in the media and our culture right now, and GH writers are known for capitalizing on these storylines to pull in viewers. We haven’t forgotten how Luke Spencer (Anthony Geary) and Laura Collins (Genie Francis) got started now, have we? Stay tuned for more General Hospital spoilers as this storyline is just warming up.