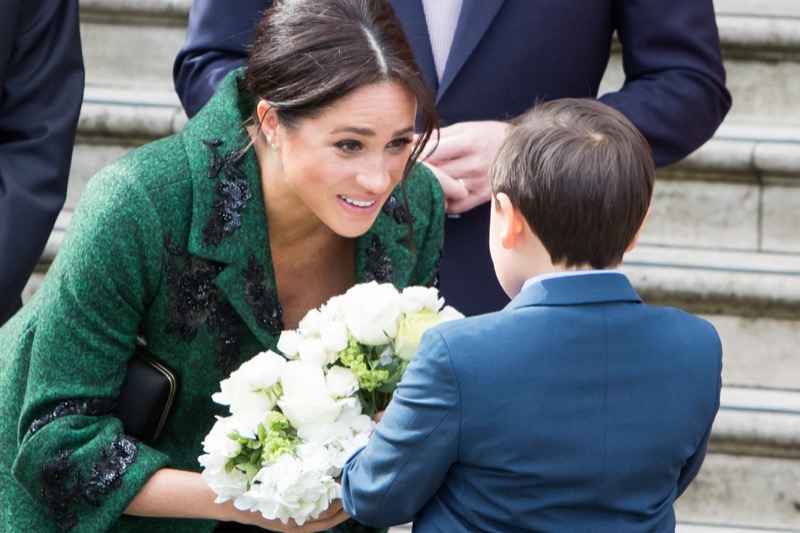 Meghan Markle is in the news again, which probably makes her very happy. Actually, many people suspect that headlining is a deliberate tactic to keep the focus on her as a celebrity.  Prince Harry wanted to keep his wife safe from the millions of eyes that were on his pregnant wife. And, it also seems his obsession with privacy went as far as not wanting the royal birth tradition photographed. Allegedly, the royal family members were upset, because of protocols. Now there’s a lot of outrage because she didn’t get herself polished up and pose on the steps outside with her baby in her arms. But did they have a good reason for insisting on privacy?

Meghan Markle Fights For Titles For Archie And Lilibet

Since Queen Elizabeth died, there’s been more focus on Prince Harry and his wife than ever. A lot of supporters felt outraged because Harry couldn’t wear his uniform behind the coffin. Additionally, they felt angry because it looked like his wife was shunned in public. Meanwhile, she made the unforgivable sin of holding her husband’s hand in public, allowing someone to hug her, and failing to release her death grip on some flowers. Some fans of the Suits actress just can’t get their heads around all of the apparent BS that goes with being a royal. So, they think the couple had a good reason to defy tradition with the birth of Archie.

The new ruckus comes shortly after Meghan Markle referred to someone who spoke about the wedding. They allegedly said that she made Africans as happy as they were when Nelson Mandela was freed. So, there was a big hoo-hah about it and her haters loved seeing Africans slam her for it. But, their controversy started long before that. Actually, it can be argued that they are their own worst enemies ever since the interview with Oprah Winfrey. However, some people agree with her keeping her birth private. And that’s why there’s a fuss about titles for Archie and Lilibet.

Meghan Markle And The Private Birth

Fox News reported that a royal expert claimed that Harry was so desperate to keep the birth of Archie private that he seemed obsessive. Meanwhile, their source “Kinsey Schofield claimed that “Meghan thought the entire ordeal was barbaric and did not want to participate. Meghan originally didn’t even want to have the baby in a hospital.” Anyway, the fallout seems to be that because they didn’t parade around on the steps with the baby, they broke protocol. So, allegedly King Charles won’t let the kids have HRH titles. While critics rage about it. supporters think that it’s an archaic practice to have to give birth by the rules.

Meghan Markle found some support from those people who feel that a woman should have the right to have their baby wherever they please. Additionally, they think it’s time to stop pushing for women to look perfect within hours of giving birth. @WeAreNot_Amused said, “It is archaic and barbaric to expect a woman who has birthed a child and has stitches holding together her vagina possibly all the way to her rectum to stand up at all, especially dressed up and for the public. Harry is open and clear about his PTSD and anxiety with the press.”

Some Theories Are Around That She Had A Fake Pregnancy

Some folks believe that Meghan Markle never had a baby at all and it was carried by a surrogate. Of course, that would cause complications with titles.

Yes it was secret I’m sure because it was a surrogate , can’t wait until they get to the bottom of that one !

Meanwhile, others question if Harry was even the dad. However, assuming that she did carry Archie and that Harry was the father, do you think that they had a good reason to try and keep the birth private? Is it too outdated to expect a public reveal hours after giving birth? And, if she wanted a home birth, isn’t that her right as a woman? Does it matter all that much where the baby was born? Shout out your thoughts in the comments below.