Did Prince Harry & Meghan Markle Miss An Opportunity By Not Living In Africa? 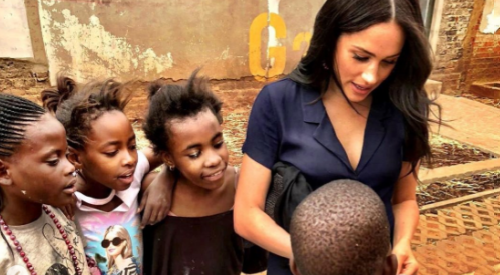 Prince Harry and Meghan Markle left the UK and headed for the USA where they live a celebrity lifestyle in California. Well, rumor has it that they plan a move to New York where they can continue to build influence and more income. However, it seems a huge pity that Harry’s desire to be Joe Ordinary never really materialized. After all, a man has to make money to support a family. But, with all the security concerns of their high-profile lifestyle, why didn’t he opt for Africa?

Prince Harry & Meghan Markle Both Have Links To Africa

Prince Charles loves Africa and he spent a good deal of time with Laurens van der Post. In fact, the conservationist and explorer was appointed as the godfather of Prince William. Laurens was met with controversy after his death. However,  there’s no doubt that he did a lot of work with well-known conservationists like Ian Player from South Africa. Historically, the royals enjoyed places like Kenya and that love for Africa seems to have been handed down to Lady Di’s youngest son. In fact, he spent time there working with elephant conservation.

Prince Harry &and Meghan Markle took several trips to Botswana, and they secretly went off on a honeymoon to Africa as well. Actually, they had their second date in a private safari lodge in Botswana and he treated Meghan to another trip there for her 36th birthday. By the time word leaked that they would honeymoon in Africa, local people were excited. Whilst they don’t give celebs much time for entertainment value, they liked that they might boost tourism. In fact, they seemed more enthusiastic than the couple might live there than Americans do about their presence in California.

This week, royal family commentator, Neil Sean mentioned that the couple deal with a lot of security issues. Actually, all celebs face that sort of problem. Additionally, he talked about the possibility that they might relocate to New York. Furthermore, it seems that hope that they might live in Africa has been dumped. And, that seems like a pity. After all, Harper’s Bazaar covered Meghan’s interests in African charity work more than once. Plus, the outlet speculated that they might eventually live there.

Prince Harry and Meghan Markle could easily have chosen to live in a safe country like Botswana or Namibia, in Southern Africa. Clearly, he’d have no problem becoming a leading conservationist in Africa. Meanwhile, his wife would have a wonderful opportunity to address issues about women there. Furthermore, she could be completely influential in educating local communities about the value of wildlife. And, without a doubt, they would score plenty of kudos and financial support for it.

Missed Opportunity By The Duke And Duchess Of Sussex?

If Prince Harry really wanted a life less complicated, he and Meghan Markle would probably have found it in Africa. After all, security concerns are the same anywhere in the world. Perhaps, he worries about malaria. Well, plenty of people live on the continent and not everyone drops dead from the disease. Kids? Well, there are millions of them as well, and the continent offers some excellent private education facilities.

What are your thoughts? Do think that not going to Africa was a missed opportunity for the royals to find peace of mind, contribute to something worthwhile, and live out of the sight of the media and public scrutiny? Bear in mind, most people in Africa don’t really care about celeb status and appreciate a helping held with conservation issues. Shout out in the comments below.